There are so many reasons why Tuscany is one of the most beautiful regions in Italy and appreciated all over the world. This land, which has given birth to painters, writers and famous historical figures, preserves spectacular landscapes that frame cities and villages which are rich in history and art. Among the latter we cannot fail to mention Capalbio, situated in the heart of the Tuscan Maremma, a large area that stretches from the coast, where Lake Burano can also be found, and extends inland across the Metalliferous Hills, the Albegna and Fiora Hills to Mount Amiata.
Looking at the historic center of Capalbio, you can see how time seems to have stood still, surrounded by artistic treasures yours to discover. What is most striking is undoubtedly its walls, majestic and perfectly preserved to this day.

Capalbio and its walls: the historical background

Although the area where Capalbio stands has been inhabited since Etruscan times, the first document to mention it dates back to the year 805 and it is the “Bollo Leonino Carolingia” in which it is said that this land was donated to the Roman Abbey of the Three Fountains by Charlemagne.
Many lordships succeeded each other in Capalbio in the Middle Ages, from the Aldobrandeschi to the Orsini, and then in 1416 it passed into the hands of the Republic of Siena, under which Capalbio became an important commercial centre. During those centuries the double walls of Capalbio were built, and are the main architectural wonder of this Tuscan town.
Moving closer to the historical centre, you can immediately notice these ancient walls, which were built in local stone with the aim of defending the city from enemy expansionist aims. It was the Aldobrandeschi who ordered its construction between the 11th and 12th century incorporating the Rocca, which was the heart of the feudal power at this time, into them.
With the arrival of the Sienese in the '400, the first wall was strengthened and at the same time a second one was built, to protect the village even more: the lowest inner wall is certainly the most spectacular, being interspersed with towers, most of which are square in shape. Looking at the outer walls, whose base is escarpment, you can see doors and windows: in fact. over time portions of the walls have been literally incorporated into the buildings of the historic centre. 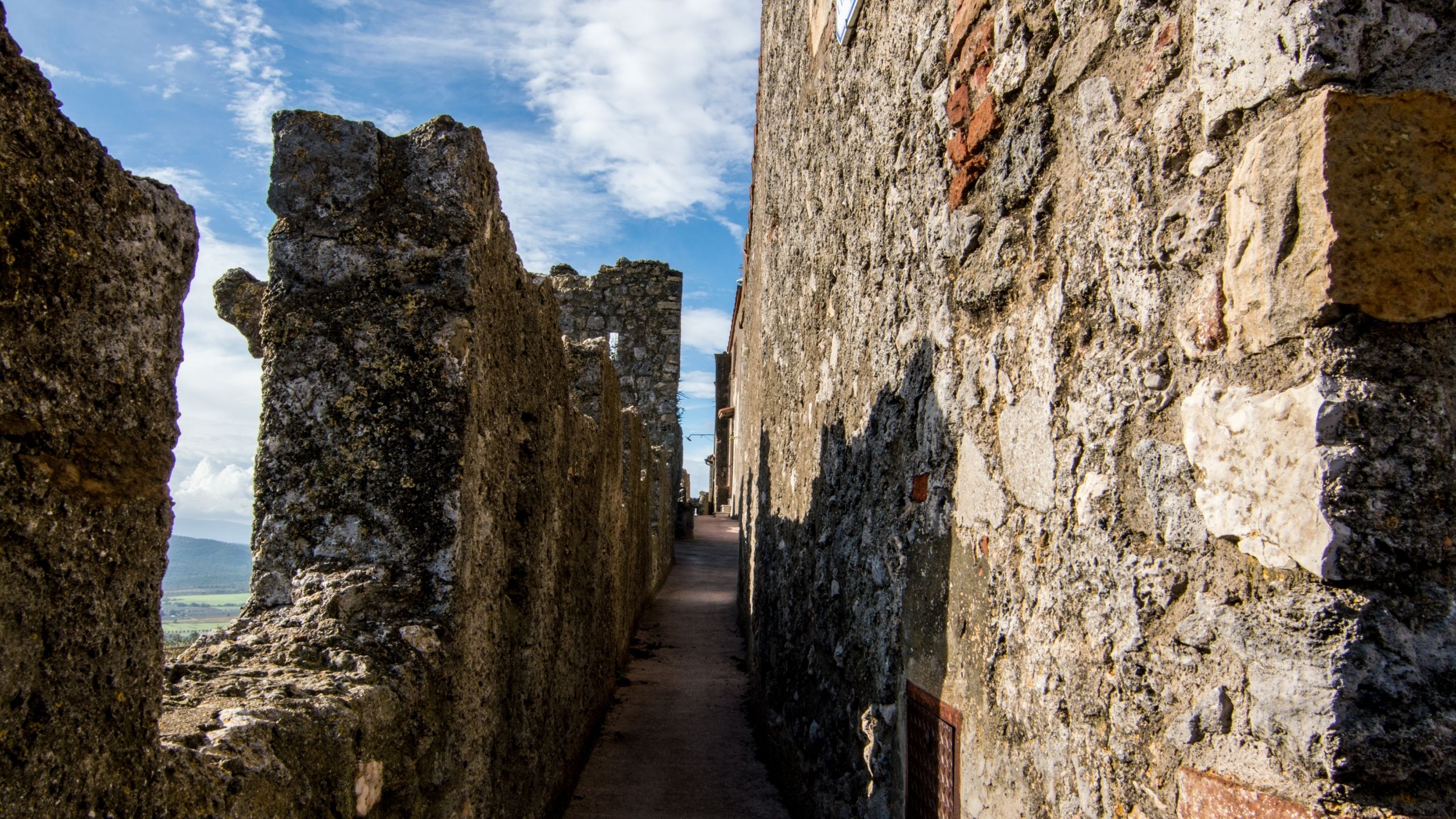 Visiting the walls of Capalbio

Besides admiring the double walls of Capalbio, it is possible to “experience it" as in the past the armourers did, while walking along all its length on the patrol walkways, which are certainly scenic in the light of the walls which are of different heights.
From here the view opens onto a spectacular horizon, where the landscape looks almost like a colourful palette of watercolours: you can see the surrounding area around Capalbio, which includes some of the most emblematic places of the whole of Tuscany, from Lake Burano, passing over Monte Argentario and up to the Giannutri Island, which can be seen on clear days.
The main entrance to the historic centre is the Porta Senese, on which you can see the Medici coat of arms dated 1601 (in memory of the annexation of Capalbio to the Grand Duchy of Tuscany) and where a gravestone was placed in 1418, the year that the walls were renovated by the Sienese. After passing through this door you can walk along Via Vittorio Emanuele II, following along the crenellated walls until you reach the Arco Santo or Holy Archway and with it the Pieve di San Nicola first and then after this the Rocca Aldobrandesca.
From the Porta Senese you can also go towards the picturesque Piazza Magenta, passing through parts of the city walls: the square, which is surrounded by decorated houses built in brick and stone, old staircases and flowers, is a real beauty that hosts many events in Capalbio of great importance, from the Nights of Poetry to the Capalbio International Prize festival. This last event, which gives awards to those who have distinguished themselves in the field of journalism, politics and nonfiction, attracts many V.I.P.s to Capalbio every year.

Those who do decide to visit Capalbio and want to learn more about its imposing double walls, can book a stay at the Hotel Residence Valle del Buttero, that is located just a stone's throw away from the historic centre of the village. The structure is completely immersed in nature and offers every kind of comfort to pamper its guests: in every room and suite there is a prestigious set of high quality toiletries, that are made with extra virgin olive oil, and the scent reminds you the beauty of the Tuscan Maremma.
The hotel also offers an outdoor swimming pool, a verdant garden and even a Technogym fitness area; on the outdoor veranda there is a ping-pong table and a pinball while in the lobby you can find a billiard table, to fulfill the needs of all the hotel guests.
From the Hotel Residence Valle del Buttero guests can easily walk to the restaurants of Capalbio, where they can taste the traditional Tuscan cuisine, from “panzanella” and “acquacotta” to the dishes which feature wild boar, a real local delicacy.
From the hotel you can easily walk into the historic center of Capalbio and its wonderful walls: however, it is also possible to organize excursions, which are among the most popular activities in Capalbio as the village is located so near to unique and evocative places. For example, you can easily reach the long beach of Capalbio and the nearby Lago di Burano Nature Reserve, the first historic oasis managed by the WWF. Alternatively, you can visit Saturnia and its thermal baths, and at the Cascate del Mulino everyone can enjoy the benefits of these hot springs, which were well known to the ancient Romans, for free.
Not far from Capalbio and absolutely not to be missed is the Tarot Garden, the work of Niki De Saint Phalle: it is a park that, reproducing the figures of the major arcana in huge kaleidoscopic statues, will give a wonderful day of relaxation and fun to both young and old.